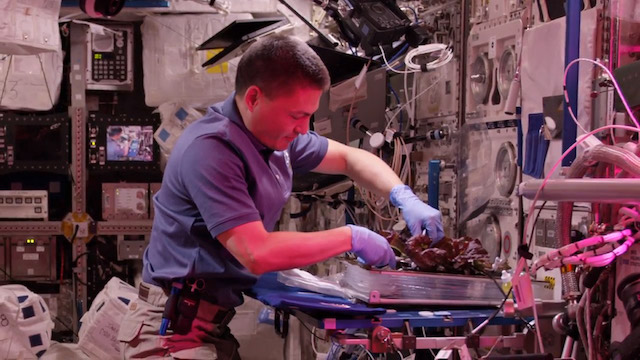 In space nobody can hear you grow vegetables. That is probably because it is hard to grow vegetables in space. But that hasn’t stopped anyone from trying, either in real life or in their imagination. From the very beginning, we have been sending seeds into space, almost as soon as we had the technology to breach the upper atmosphere in fact: on July 9, 1946 some specially cultivated seeds were the first living organism to reach space on a V2 rocket. This was apparently to study the affect that radiation had on living tissue and organisms, and of course we slowly moved on from seeds to street dogs and eventually humans.

These first seeds in space were never seen again because they never made it back to earth (much like poor Laika the street dog who died after just two hours in orbit) and perhaps that was the point. However since then, most of the reasons for seeds in space has been to keep the long held, ever receding dream of interplanetary human space travel alive. Growing plants has also proven to aid the psychological well being of astronauts as they spend extended periods aboard orbiting satellites such as the International Space Station. The relaxing and recreational affect of tending a small garden, even if it is on a plastic tray under LED lights is much the same for astronauts as it is for any gardener back on earth – it provides a sense of purpose as well as pleasure, it nourishes the soul in an almost atavistic way.

The humble Arabidopsis, or cress as it is commonly known, is one of the humble rockstars of plants grown from seeds in space. First cultivated in 1982 by the Russians aboard their space station Salyut-7, Arabidopsis has been used in many studies since by NASA scientists, as it is a model organism when it comes to studying plants as well as being one of the first to have its complete genome sequenced. This allowed for an analysis of any affects on its DNA during cultivation in zero gravity or with high levels of radiation. Indeed since then a whole host of plants and flowers have been cultivated aboard space stations, including a blooming sunflower and a zinnia. And just as recently as a couple of years ago in 2015, the crew members of expedition number 44 on the ISS became the first humans allowed to eat their own crop of red romane lettuce while still in space. This was made on something called, rather obviously, a VEGGIE, a collapsible growth unit that has seeded plant pillows and LED lights of the red, blue and green spectrum. The pillow technology allows to offset the effects of gravity, which are the biggest hurdle to cultivating plants in sub zero gravity conditions as water doesn’t necessarily want to stay in contact with roots, resulting in either a drowning or drought situation for the confused root systems.

Of course the reality is that to travel the distance to Mars it will be imperative to be able to grow edible foodstuffs, both on the journey there and on any potential manned base. Such a scenario was brought to the popular mind in The Martian, the Ridley Scott sci-fi, bring-him-home romp that featured Matt Damon as a McGuyver style botanist who is, somewhat unfortunately, left for dead by mistake on Mars. But thankfully for Damon’s character, like his creator Andy Weir, he knows his stuff and sets about setting up a make shift farm from which he will feed himself for the 100 or so days it will take for him to be rescued. The problem of growing anything on Mars is what to grow it in; Weir was very proud in the accuracy of his story and the science underpinning it, and indeed it seems that the solution Damon’s character alights on, mainly mixing his excrement with Martian soil and water in which to grow potatoes, would seem to work and has even been simulated on earth. One problem the movie doesn’t deal with is the fact that using untreated excrement as a fertiliser would of course be dangerous, as it would be full of his colleagues’ pathogens and in all probability make the potatoes toxic. But in general these difficulties aside, it is possible to cultivate on Mars in the way the public got exposed to in The Martian, and tomatoes, wheat and soybeans, as well as the humble spud, are all actively being pursued by plant researchers to become the vital link in any future plant cultivation (and exploration) in outer space.

It’s not a coincidence that an article outlining the history of growing plants in space ends up looking at a work of art. The truth may be that we simply don’t know what do to in space other than to use it as a place to dream in, to create scenarios that are of this world but do not fit it in any meaningful or possible way other than to satisfy our insatiable curiosity as a species. Growing plants in a sustained way becomes, for the plants most of all let alone humans (how callous and misguided the word ‘sustainability’ becomes when placed in outer space) just a dream lost upon waking. We can create an engine powerful enough and burn all the fuel we want, but the impetus to cultivate a humble plant in the vacuum of space or inhospitable environment of a exoplanet, and then eat it, this has a dreamlike visionary aspect to it that we could term whimsical, if in fact it didn’t also contain our own finitude.